The sudden death of his father forces a reformed addict to come to terms with long-held resentment.

It’s worth mentioning that the subject matter is not one that holds my attention – in some ways, perhaps, it’s too close to the bone, and perhaps the flood of misery memoirs in recent years has deadened the market for otherwise well-written books like Blame. Yet the subject matter is important and an integreal part of life: a brilliant research chemist makes his own drugs (Breaking Bad), reforms and builds a life away from family (Street Cat) whilst dealing with a problematic mother and father (Curious Incident). And there’s a childhood diary, a possible love triangle, misundertanding of betrayal… 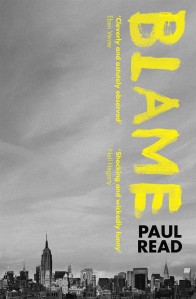 So does Blame work? To be honest, I do not know. There are actions that seem too random, that set the reader up to just know that the plot has been set up to have a problem, and it’s at those times you wonder about the intelligence of the protagonist. Elsewhere, the sudden washing away of blame and resentment seems to have no precursor – and even as abrupt a realisation as an epiphany should have something solidly supporting the realisation. Throughout, the explanation of the desire and urge to return to addictive substances is nicely done, but where the urge actually cropped up the description was curiously flat…

But hold on: that may well have been the intention. We are looking at a reformed alcoholic/drug addict who has to keep his urges under strict control. When the protagonist does fall back on his addiction, the set up is so long that we are not surprised: the errors of judgement seem so out of character for a brilliant chemist that the steps seem too contrived.

But, again, isn’t that the point? That a drug addict will set themselves up for a fall?

The emptiness is a pity, though, as these questions are nicely raised. Dealing with a furious break up is never easy as a child – especially when parentage and identity are called into doubt – and perhaps the cleansing is the only way to cope. There are also great flashes of childhood memories, a reprise of erratic diary entries, of a wish to return to simpler times. The hero’s childhood den and his return is almost perfect, fitting in with the yearning for a time before resentment and blame could fester.

It is these childhood sections are the strengths of the story, and those that could do with a lot more focus. The memories feel incredibly solid: nicely opinionated, confusing yet puzzled in tone, a convincing portrayal of a growing child trying to deal with a shifting and destabilising reality. It is a very real life, even though told through a diary, and I ended up wishing for more – indeed, it’s worth reading Blame for these sections, alone.

Stop before the epilogue, though, as it comes across as too overtly Hollywood compared with the rest of the novel. We could have just been left with hope and the promise of potential rather than have an ending fed to us. It’s odd, almost as if it were a late addition…

Overall, Blame left me wondering. The subject matter is a trendy read and would certainly gain instructor approval on many writing courses. The feel is that of a misery memoir crossed with a coming-of-age story, a blend of The Curious Incident of  the Dog in the Night-Time, Breaking Bad and a Street Cat Named Bob.

If you’re a reader who’d appreciate such a mix, then Blame is well done, and tidy. Even if not, then it’s worth reading it for the childhood diary sections alone.

Hmmm. I seem to have made up my mind, after all.