She be Damned by M.J. Tjia

An aristocratic, Victorian, female sleuth? Or someone with something to hide, resented by those in the upper echelons of society? Or someone openly displaying a way of life that is, well, not quite up to the – perhaps hypocritical – standards of the suppressive, gentrified class to which she aspires?

For us all, the different halves of our life, past and present,  work and home are normally separate. Sometimes, however, they interfere with other and even overlap, as is the situation with Heloise Chancey in She be Damned, for her former existence amongst the less savoury slums of Victorian London becomes the subject of an investigation.

Heloise is a female private detective, once a prostitute – amongst other less respected careers – and now a mistress to a wealthy member of the nobility. Almost like those mistresses/concubines in China (we discover she is ‘exotic’, eventually half-Chinese, if we haven’t guessed by then) her status is semi-official, even to the extent of attending the opera with her lover.

Because, despite being ‘kept’ in a fairly opulent lifestyle, she loves him and takes her role and relationship really quite seriously. Life as a woman in the repressive Victorian era is not easy.

Heloise is approached by her employer and an agent for a father to search for a lost daughter, one thrown out of home for becoming pregnant but who has had a arrangement made for her, in a convent. The girl ran away, to London, and is believed to have fallen onto hard times and dragged into the less salubrious lifestyle of Heloise’ past. Will Heloise find her?

Against the advice of her caring Chinese maid, Amah, Heloise investigates, renting a dirty house from her former brothel. The streets, dirt and neighbours are a far cry from her new life, pulling up memories she would rather avoid, but she finds her experiences useful as she hunts down the missing girl. Whilst doing so, however, she finds a series of crimes that are horrific, barbaric, and which could probably only have been carried out in the Victorian era. She now fears for the life of her quarry, her maid is accused of the crimes (through nothing but racism) and the search intensifies… 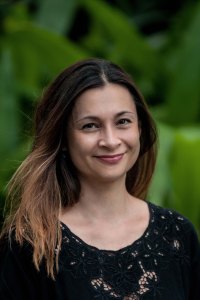 Heloise is careful of and diligent in her clothing selection, using it for disguise, to impress, to fit in or even manipulate. The care with which she chooses make-up and layers of clothing appropriate to the task in hand is an interesting aspect of her character, sometimes conflicting as she juggles home with the down-life where she must live for the investigation. Such interesting aspects of historical life are often missed.

The crimes are horrific, with Heloise barely escaping with her life. The historical details and setting of the killer and the mode of death is gruesome, but portrayed in such a way that we are drawn into the investigation. Sure, we suspect that we and Heloise have missed a vital clue, one which is there all along, and the reveal is satisfyingly logical, consistent with the rest of the investigation and one which ardent crime readers may well pick up – as they should.

The foibles and weaknesses of Heloise in having to maintain her normal life whilst dealing with life as a detective is frustrating for her and, occasionally, the reader: one hopes she will learn from her experiences in future novels. However, there is an intrusion into our immersion into the story: the occasional cut-out to Amah’s history, a side track that we work out anyway (I found myself skipping the large chunks of italicised text). Such background could have been part of a future book in the series, but it’s almost as if somewhere, someone in a writer’s group insisted that it was needed… but it is a minor consideration.

Overall we are drawn to the plot, to the vast discrepancy between rich and poor, and to Heloise and her investigation. She is not perfect, is conflicted by her situation, as vain as she needs to be, yet simultaneously caring: she is real.