She be Damned by M.J. Tjia

An aristocratic, Victorian, female sleuth? Or someone with something to hide, resented by those in the upper echelons of society? Or someone openly displaying a way of life that is, well, not quite up to the – perhaps hypocritical – standards of the suppressive, gentrified class to which she aspires?

For us all, the different halves of our life, past and present,  work and home are normally separate. Sometimes, however, they interfere with other and even overlap, as is the situation with Heloise Chancey in She be Damned, for her former existence amongst the less savoury slums of Victorian London becomes the subject of an investigation.

END_OF_DOCUMENT_TOKEN_TO_BE_REPLACED

The Magician’s Lie by Greer Macallister

[This is the UK release of an award winning and soon-to-be-filmed US best-seller.]

But what if it is all true, or mostly true bar one, little lie…

END_OF_DOCUMENT_TOKEN_TO_BE_REPLACED

Song of the Stork by Stephan Collishaw

War is not a grand narrative, but the accumulation of grief on individuals and, here, a specific individual. I was unsure of its exact location, though there is a renowned Selo in Poland and numerous villages of Selo in Russia. Frankly, the exact location of the village doesn’t matter as the The Song of the Stork by  Stephan Collishaw follows the life of a Jewish teenage girl during WWII, firstly after the Nazis come through and kill her friends and family, and then as she tries to survive the constant threat.

And the soul-crushing impact of the atrocities of war on an ordinary individual is what The Song portrays.

END_OF_DOCUMENT_TOKEN_TO_BE_REPLACED

I’m delighted that ‘The Honey Killer’ is finally available on Kindle: 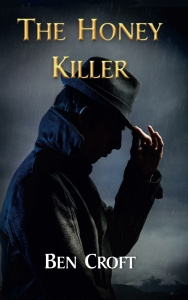 This was a book started as an MA project, a deliberate exploration into a different genre for me (hence the pseudonym) but one which I found quite useful. It traces the history of an assassin – an ethical assassin, but a killer, nonetheless – from his appalling childhood involving isolation, bullying and manipulation through to being a loner who knows how to do one thing only: kill in strange and unusual ways.

It is also a book about a platonic love, about worship of individuals who show kindness, and about reconciliation. The settings – London, Paris, Amsterdam adn the fictional village of Snoddington Beeches – are all based on my own experiences working here and in Europe. The history, from Operation Pied Piper (1939) onwards is as accurate as a work of creative fiction can be.

What’s interesting from a process perspective are the changes that were made after it was assessed for one of the MA modules. I’ve blogged about the realisation before and that the book was missing a character, but having added much more to the character (I’ll leave you to guess which one it was) the book took on a much more rounded form. It enabled an ending that reflected and completed much of the interaction throughout the historical components of the book (even the narrator’s ‘present’ is 1984).

Whatever teh experience and learning, for me, it’s wondeful to see something from the MA in print. 🙂

… the perfect break. I’ve just come back from a short break down in Dartmoor. We go down there whenever we can, stay at the excellent Lydgate House Hotel (which I’d recommend) and walk and read. That’s walk lots with a little reading whilst we break, or walk a little then read for an hour or more surrounded by beautiful or inspirational scenery. This time, for me, it was as much inspiring as breathtaking.

END_OF_DOCUMENT_TOKEN_TO_BE_REPLACED

This is an oddity, perhaps, but I recently rediscovered the notes and display material I made for a display and diorama I arranged in 2005 for the 200th anniversary of the Battle of Trafalgar. I put together a host of display materials and arranged with some friends to have some 1:1200 models of the ships involved placed on a large, seascaped table to illustrate the centre of the battle – the main part of the British columns and the centre of the French and Spanish lines. I no longer have any photos of the final layout (rats!) but have the main display materials.