I’ve just finished a book proposal and a reflection on it for my MA and I have to say that they are the most painful 16K words I have ever written. Not emotionally, nor intellectually, but physically painful.  The proposal was for My Little Book of Pain, a book on Pain Management by an insider – me – that shows a viewpoint from an non-professional, independent insider, one who is going through the process.  The reflection, of course, was on that process.

It showed just how much I rely on the distraction component of writing to help control pain.  When writing I disappear into the book, story, reflection or research – whatever it is I am doing – and, in the intensity of that immersion, I forget my physical body.  It’s a great disconnect and it helps manage the pain.

The trouble came from, in hindsight, an obvious place: what if, when writing to control and avoid pain, you are writing about pain and the way you have experienced and controlled it?

The answer is ‘ouch’.

END_OF_DOCUMENT_TOKEN_TO_BE_REPLACED

I missed the Creative Non-Fiction seminar yesterday due to breakthrough pain. This is pain that somehow gets through all the training, all the routines, all the distraction and all the painkillers. For anyone suffering Chronic Pain it is a frustrating phenomenon that has to be accepted and dealt with to make sure it is kept to the minimum. If the breakthrough pain is not brought under control you find yourself falling back into permanent, uncontrolled pain.

That control is not easy to reassert.

In my case it means swallowing my pride, reaching for the more powerful opioids and making sure that all the relaxation, meditation and transference exercises are brought to the fore. Whilst some rest is really useful to let the worst of the pain die down and the analgesics take effect, over the course of the day resting becomes both exhausting and ineffective: exhausting because I have to focus on the exercises all the time; ineffective because that focus is impossible to keep up for very long.

So what to do?

END_OF_DOCUMENT_TOKEN_TO_BE_REPLACED

I was confused and struggling with voice, something we discussed a lot at the MA in Writing Creative Non-Fiction session yesterday. I also talked about it afterwards with a few others on the course and came to a  conclusion that, in hindsight, may have seemed obvious: only you, the writer, can know the book you are writing.

END_OF_DOCUMENT_TOKEN_TO_BE_REPLACED

I recently saw this report on a blood test for depression in one of my science feeds.  What many may not know is that severe depression is an often accompaniment to Chronic Pain, in all its forms, as dealing with the pain can be exhausting.

Why is this so important, then?

Simply because it pushes back against the taboo surrounding depression, it finally says: ‘depression is a real illness, not fake’. For many, depression doesn’t exist as an illness, its just someone’s attitude of mind, laziness or someone being ‘weak’. With a blood test, depression becomes a disease or infection like anything else. What’s more, the blood test reveals the probably severity of depression and gives some idea of the best way to handle it.

All of which adds up to a fantastic breakthrough. I hope it is available soon.

Curious things, banks. I’ve had a tremendous amount of trouble setting up a Business bank account. So much so that I finally sent a letter saying something along the lines of ‘I give up – it’s now taken over three months and you’ve not bothered to get in touch, process my application or treat me seriously’. I’ve thought of running through the FSA, already, and raising the issue publically to highlight the problems peeps like myself can face.

So, here is a tale of frustration in setting up an account. Sure, it may be ranting in nature, but the details are correct…

END_OF_DOCUMENT_TOKEN_TO_BE_REPLACED 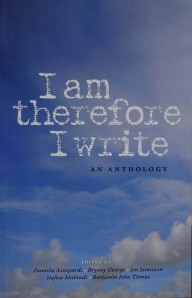 The BCU School of English anthology 2014

The anthology recently released from BCU English School with contributions from students (PhD to BA) and a couple of lecturers. It has varied content: the script for a short TV drama, poetry, short stories, haiku (I particularly liked those) as well as the ‘100’ short I mentioned earlier. I don’t think it will be available other than through BCU School of English, though a number of copies were available on the night and it has an ISBN suggesting general availability.

As I mentioned on Facebook – it was a good evening with R J Ellory particularly impressive in his lecture on writing. It helped that the upshot of his talk, for him, was ‘I am therefore I write’, and for us it was encouraging in that he spoke of his 22 unpublished novels that are sitting in his attic and which will never see the light of day. There is hope as I merely have three in my own attic.

Books from the BCU summer show award for screenwriting.

Apart from some readings (I read ‘100’, a few others read their contributions) there were also a number of awards given out for work on the MA. I was totally surprised – delighted – to share the screenwriting prize with the worthy Nafisa Muhtadi.  As I mentioned on Facebook, Nicky Tate also won an award or two and a couple of others were given out for stage plays. Apart from RJ Ellory’s latest book, ‘Carnival of Shadows’ (which I am quite enjoying, to be honest) we also had a Watersontes voucher which I spent on ‘Blitz Families’ and ‘When the children came home’ – both books on the effects of evacuation on others or at other times.

Yes, there is a project concerned with evacuees, at the moment!

Feels like school prizegiving, again.  Not that I ever got any awards at secondary school!