I’ve heard about it before, that those suffering the loss of close family members are often isolated in their grief, ostracised by those closest to them, those who could offer the support and comfort they need. The courses and study on pastoral care for those that grieve point out the issue and stress the need for those offering such care to reach out to those who are suffering such a loss. For many, perhaps embarrassed, it is all to easy to just offer a perfunctionary ‘if you need me’ and disappear, not contacting the bereaved for weeks.

This completely ignores the fact that it is extraordinarily difficult to reach out when you are in so much pain. I know – we know – for we have just lost our child and we are experiencing the problem, to an extreme.  And we have become isolated from all but a few friends, and ostracized by most (though not all) of our family. END_OF_DOCUMENT_TOKEN_TO_BE_REPLACED

Another short has had an outing and come back home. 🙂

I was never too sure as to the title of this piece: Care Returns for Rachel Bride or Time for Rachel Bride. I ended up settling on the latter as time is a recurring theme throughout and ‘care’ is a sticky subject nowadays in competitions, apparently, due to overuse. Nonetheless, this is also about the final care and why.

END_OF_DOCUMENT_TOKEN_TO_BE_REPLACED

Pain – or Life – Management is an ongoing effort, a framework that often results in a daily management plan. It may seem a burden, but you get used to it. You know what you want to achieve so you work out what you may be able to do in a particular day or number days, work in rests, distractions, possible medication, relaxations and end up with a plan.  Being a writer helps as the physical work can be wrapped around the vital task of reading.

But then the plan hits reality and has to be adjusted. That’s fine: the phrase ‘no plan ever survives contact with the enemy’ comes to mind. You adjust it, add in more medication, perhaps, more breaks, even a deliberate, full lie-down/meditation.  That tends to work, and you adjust the plan.

But then life really kicks in and stomps all over the new plan, all over the intentions. Life Management becomes a real struggle.

END_OF_DOCUMENT_TOKEN_TO_BE_REPLACED

The readings were well-chosen and well-read; the homage to Gloria’s life was exceptionally well-written and spoken, Richard deserving huge amounts of credit, and it was well-attended.  But funerals are never easy. I’ve been to a fair few in not only a private capacity but in a professional capacity, too.  Even for the guys in the black cars it can be difficult and a professional detachment has to be built and maintained. Damp eyes are always present, grief pulling hard on the ropes it wraps around a chest.

This funeral was different.  Sure, there were a few damp eyes, but very few; there was also an air of melancholy and shared loss.  But – that’s a big word – but there was also a huge amount of relief and respect for a talented woman who expressed love and concern for all in her charge and who she loved.  Her life-story revealed numerous challenges that were faced and overcome, not just from being widowed with a young son, but also a life spent dedicated to giving others a better chance at life and living. Those wishing to pay their respects – and I believe that is _really_ what the mourners were doing – filled the church.

END_OF_DOCUMENT_TOKEN_TO_BE_REPLACED

Of course, things have been busy at the tail end of the modules for this MA, and I’ve been struggling with medication balance as well as just recovering.  And, on top of that, my stepmother has died after over three years in a care home for her Alzheimers.  It is a crazy disease and, of course, we’ve been expecting it for a while but, when the death finally occurs (inevitably of pneumonia), those closest are hit with the compounded loss they have been storing up for years.

In our case, it’s Dad, of course. I think I said goodbye when she stopped recognising me and my son (she had been confusing us for ages – easy to do: tall, blonde, handsome, sli… er, well, maybe not the latter). It was then that the loss was mutual.  But it was unpleasant.

It got worse: the last 18 months or so has been horrible, mainly seeing Dad get so upset when she suffered one of those care-home abuses which led to three people, including management, being landed with suspended prison sentences. Eventually she was re-homed (ugh!) to what ended up to be a much-happier and much better home.

It doesn’t help that the original care home has had the cheek to send a bill for early withdrawal.  Indignation strikes and fury rears its ugly head. But we have to let it wash away to support and curb Dad’s obvious anger.

That anger is not what she would have wanted. She was someone who the grandchildren and was really valued as a SEN reading teacher: to her, everyone could achieve, even when they came from the worst backgrounds.  Always welcoming, encouraging, self-effacing, she was too easy to be overlooked, but she was one of the people who the world really needs, leaving it a better place through her life and living.

She had a wisteria in a garden which I admired, so she gave us a rootling from it.  It has now overtaken the back of our house. Glorious, weeping purple sprays, a cascade of texture and a scent that permeates the house and garden so plentiful are the blooms.  It has sheltered blue tits, doves and bees; weathered being hacked back when a fence collapsed; had cuttings taken and given to others and, with its texture, has turned a house into a home.  It will always be “Gloria’s Wizzy”, always reminding us of her. 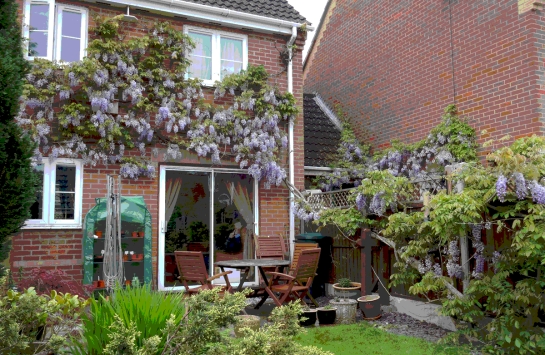 Heavily pruned by some gutter-cleaners, but still bursting forwards with colour

She will be missed, and fondly remembered.